400 years of Mennonites in Krefeld

In October 2007, on the occasion of the "400 years of Mennonites in Krefeld" anniversary, various lectures on this topic took place, which are summarized in a book. The book has 360 pages, half of which is dedicated to the Krefeld Mennonite community. It costs €33 in bookstores, but can also be obtained from the Mennonite community for €25. It is free for members of the Mennonite Historical Society.

von Kurt Stephenson, with unpublished Brahms letters and the pictures and sketches by Willy von Beckerath, published by the Brahms-Gesellschaft in Baden-Baden, 1979 published at Christians Verlag, Hamburg
ISBN 3-7672-0642-0 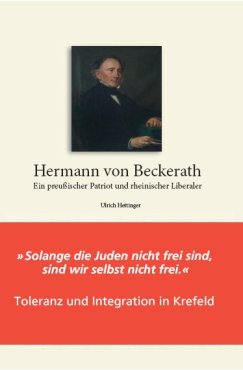 "As long as the Jews are not free, we are not free ourselves." That's what it says, white on a red background, on the lower third of a political biography that will be published in mid-April 2010.

Hermann von Beckerath (1801-1870) was one of the most important liberal politicians in the Rhineland before March. In several Rhenish provincial parliaments, in the first united Prussian parliament and in the Paulskirche parliament in 1848, the Mennonite Krefeld banker represented the views of the liberal Rhenish bourgeoisie, which aimed at political and economic modernization. He also came to the fore in particular through his resolute advocacy for full civil equality for religious minorities, especially the Jews.

This political biography traces the life of Hermann von Beckerath up to 1848 and describes it in the context of the political, social and societal debates of his time. Compared to politicians like Gustav Mevissen, David Hansemann and Ludolf Camphausen, Beckerath's profile stands out in particular. He was both at the same time: a Rhenish liberal and a Prussian patriot.

The lower third is aimed at one of the most important aspects of Hermann von Beckerath's political work: his repeated and committed advocacy for full civil equality for religious minorities, especially the Jews. The quote is taken from a speech from 1847 and establishes the connection between the freedom of all citizens and that of religious minorities.

With the motto "Tolerance and Integration in Krefeld", the lower third takes up the theme of a ceremony on April 18th. In it, not only is the book presented to the public, but at the same time representatives of the Jewish community present a reproduction of a thank-you certificate that the Jews in the Rhineland gave Hermann von Beckerath to representatives of today's Mennonite community. In addition, questions are asked about the importance of tolerance and integration for living together in Krefeld today.

Ulrich Hettinger, Hermann von Beckerath. A Prussian patriot and Rhenish liberal, 370 pages, bound Krefeld 2010. Published by the Krefeld Mennonite community in conjunction with the Krefeld City Archives and supported by the Rhineland Regional Council, the City of Krefeld and the Mennonite History Association.

The author is the office manager in the Ministry for Economic Affairs, Small Business and Energy of the State of North Rhine-Westphalia in Düsseldorf.