A considerable part of our family history is connected to Cracau, a small Rococo castle nestled on the left Lower-Rhine valley. This little jewel is worthy of detailed description for it no longer exists. It was destroyed (by bombs) in 1943.

In the year 1417 Cracau was mentioned for the very first time on occasion of the death of the count Friedrich III. of Moers.

Therefore we can presume that the fortress was built around this time. Not before 1586 the name Cracau appears again when it was besieged and conquered by the Spanish under the Duke of Parma. The Spanish national state, the unification of the kingdoms Castilia and Aragon was born by the marriage of Ferdinand II. of Aragon and Isabella I. of Castilia. Later the development of the Spanish empire began with the journeys of Columbus. But a little later the leaf turned. The marriage of “Johanna the madwoman” with Philipp I. of Habsburg lead the Habsburgs with Karl I. to the Spanish throne. Due to various military tasks and the fight against the Turks, Karl was not in the position to crucially weaken France. No, France was even able to re-raise during the time of Philip II. and the dominance on the oceans got lost by the victory over the Spanish armada. In these wars the Spanish wanted to fight the protestantism. But Philip failed to re-win the protestant part of the Netherlands and the protestant England back to the catholic church.

In 1601 Baron van Cloudt took possession of Cracau on behalf of the Prince of Orania. On November 5, 1605 Cracau was besieged once again by the Spanish under general Bucquoi. Two days later the soldiers of the fortress surrendered.

In 1608 the county of Moers, the city of Krefeld and Cracau were declared as neutral and in 1609 Prince Moritz of Orania took over Moers and Cracau on the base of an interims peace between the Spanish and the Dutch. In 1678 the fortress of Cracau was broken down following the orders of the Prince of Orania. The ruins were laying there until 1720. Literature says that the area was looking “desolate and rude”. After the death of King Wilhelm III. in 1702 the county of Moers and Cracau as well dropped to Prussia.

When Hubert Rahr and others took over the ground Cracau on lease in 1719 in order to establish a dutch bleachery and a  vinegar factory the ruins of the demolished fortress were used for the new buildings. Also in the church of Fischeln, an outskirt of Krefeld, bricks of Cracau had been integrated it was said. Even in these times recycling was already known. The new castle was erected in 1720 – 1724. It was still surrounded by the moats of the old fortress. The water was supplied by the old “Kulles” the old, dead arms of the river Rhine. The area must have been very wet and marshy. The ground water was just a couple of centimetres under the ground, one of the reasons that Cracau was not disposing of a regular cellar.  110 years later, 1834, the hall with the small cellar and a first floor were added. Also the kitchen with the flat roof was built. This was the final layout with which the castle reached finally an age of 223 years until it was destroyed forever in 1943.

Main field of activitíes of the Krefeld von Beckeraths was of course the textile industry that blossomed at the change of the centuries. In all fields the von Beckeraths were active, in weaving mills for silk and velvet, but also in the further processing and the trade of yarn, thread and finished fabrics.  Because of the outstanding quality the products were sold to all parts of the world.

On Cracau they dealed with the colouring and final processing of silk fabrics. Heinrich had a lot of business trips, for example to upper Italy. He documented these journeys in a very detailed way and completed the report with hand-paintings.

Before the von-Beckerath-Straße, the von-Beckerath-Platz and the street “Am hohen Haus” were built, Cracau disposed of a huge ground which reached from the Cracauer Straße to the Uerdinger Straße. In this spacious garden one could find various plants and trees,a small forest of hazel-nut trees, an orchard, a hothouse, playground and even a small pond with a fountain.

As we know today, more and more parts of the ground were sold in the course of the years. There was a considerable demand that followed the extension of the city of Krefeld. Because obviously the textile business was not at its best the brothers Heinrich and Gerhard tried to increase their income by selling parts of Cracau. 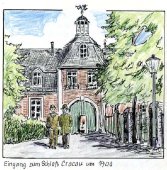 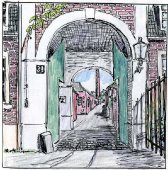 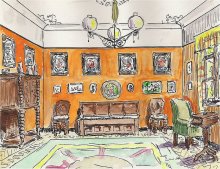 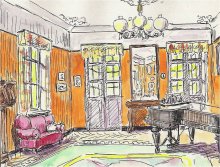 A central, important room was the so-called hall that was situated in the extended wing. There was a Grotrian-Steinweg grand piano on which Brahms and Schumann had played it was said but not confirmed. Fact is that the family Alwin von Beckerath were friends of Johannes Brahms. Whenever Brahms stayed in Krefeld they had music together. In the hall there were also many works of art that Raimund had bought on occasion of the big auction of the collection of Adolf von Beckerath in Berlin.

When the sirens yowled in the night of June 21, 1943, the last resdents of Cracau Castle, Paula von Beckerath as far as the well-known Krefeld painter Rudi Perpeet and his wife, who lived on Cracau too, moved to a small air-raid shelter under the kitchen. It disposed of an emergency exit but this was already blocked by the first bomb. Then it rained incendiary bombs onto the old house that fired immediately. Cracau burned completely within some minutes. Perpeets and Paula were still able to leave the shelter through the burning kitchen and could flee through the gate on the street where they found cover in one of the big neighbour buildings.

Days after the bomb-raid the family began to dig at the place of the former main office and to search for business papers and documents. In deed they found the safe in a depth of 2 meters. But the safe was still too hot. 8 days later they were able to lift it. After having broken up they found the business books untouched so that they could be copied before they fell to dust. Cigar boxes of Paula's husband Raimund which had been stored there seemed to be undamaged. But when they opened the boxes, they found the blond cigars changed to black Brazils that were unfortunately unpalatable.

On January 11, 1944 another bomb-raid finally levelled the remaining ruins.

The only relic of the Cracau property that is still visible today is the so-called "Hohe Haus", a two-story, representative residential building, which was built in the south-east corner of the property at the Bogenstraße / Am Hohes Haus road connection in the first half of the 19th century for the family Heinrich von Beckerath was built. It is built of the same material, the dark reddish-brown bricks, and the architectural style is almost identical to that of Cracau Castle.

It thus allows us to take a brief look back in time at what Cracau, which no longer exists today, may have looked like. The "Hohes House" was built on the former castle walls of the old Cracau Fortress. A few years ago, during renovation work, former stables and cellars were discovered, which today serve as representative sales rooms for a wine shop.