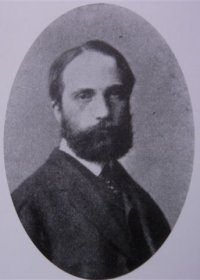 Adolf von Beckerath was the youngest of 7 children and also grew up at Cracau Castle, where the brothers Gerhard and Heinrich von Beckerath with their wives, sisters Susanna and Charlotte and numerous children led an economical but extraordinarily artistic life. The fathers were interested in art and painted. The mothers made music. There were many contacts with artists such as Johannes Brahms and Felix Mendelssohn-Bartholdy. The large family lived partly on their own agricultural income, in short, an ideal household as designed by the Italian Renaissance artist Leon Battista Alberti around 1440. The intellectual world of the Renaissance, which includes art and life as a unit, was familiar to Adolf since childhood and was to remain formative for his entire life.

Early on, Adolf was allowed to accompany his father, an important Krefeld textile manufacturer, on business trips to Italy – a country he later said he knew like home. At a young age he learned to be enthusiastic about works of art from the Renaissance, which would later become a focus of his extensive collection alongside works from the Netherlands.

After the death of his parents, Adolf began studying philosophy at the Friedrich Wilhelm University in Berlin in 1852. He was interested in many things and was also on the list of pupils of the composer Friedrich Kiel. After dropping out of his studies, he settled in Berlin as a silk merchant and traveled to Italy several times a year to buy raw silk. Of course, he took the time to continue to study the country's art in detail and to acquire works of art. Over half a century, he managed to amass a legendary collection of Renaissance art through acquisitions.

His job made him a considerable fortune. He used this to build up a huge collection of sculptures, drawings, paintings and objects of applied art from the Italian early Renaissance, as well as paintings and, to a large extent, drawings by old masters. His collecting zeal soon extended to the Dutch of the 17th century. 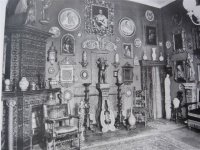 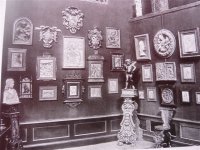 Unfortunately, little is known about Adolf's life and company in Berlin, which is probably due to the fact that he remained unmarried and had no descendants. For him, collecting meant acquiring a culture that one does not have oneself. He regularly attended concerts, organized house concerts, wrote scientific treatises on works of art in addition to his collecting activities and wrote critical comments on exhibitions. His opinion was in demand in professional circles.

For his purchases, the collector traveled not only to Italy but also all over Europe. We learned about this from our own notes and above all from the sometimes very controversial correspondence with museum director Wilhelm Bode. His handwritten lists, documentation of his donations, museum and auction catalogs from the art and auction house Rudolph Lepke in Berlin provide information about the collections. One of these catalogs also shows the rooms full of art in Beckerath's apartment on Markgrafenstrasse. The apartment in which he lived from 1862 until his death must have been a single museum.

Since the founding of the empire, the imperial interest in a rapid expansion of the royal museums in the capital Berlin, whose collections came from the rather modest Hohenzollern estate, grew. Only through quality new acquisitions could it compete with London and Paris. However, the financial means were not available for this. With Wilhelm Bode, initially a scientific assistant, then director of the sculpture and painting gallery, and from 1905 general director of the Berlin museums, a talented museum was found who, himself incredibly ambitious, understood with great skill how to encourage wealthy citizens of Berlin to collect art. Although he was not an art historian but a lawyer, as an autodidact he was able to help build up collections with the aim of one day receiving these collections as gifts to museums. On the other hand, he was dependent on the collectors who could take the liberty and have the money to travel around Europe and buy works of art not only for their own collection but also for the museums. It was the beginning of a hunt for sponsors, without which no museum can do today.

As an insight into the areas of collection, here are a few examples to demonstrate the versatility of the collection: First and foremost is what is probably the most important treasure of the former Beckerath collection, the hand drawings, which since 1902 have been the only coherent ensemble in the collection in the Berlin Kupferstichkabinett are:

Adolf von Beckerath's interest in Dutch and Flemish drawings of the 17th century is probably due to his Lower Rhine origins and the collector's Mennonite beliefs. 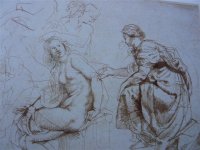 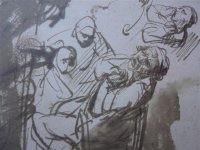 Rembrandt: Study of the lamenting Jacob being shown the bloody coat of Joseph. 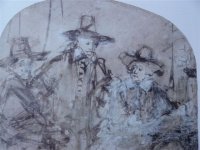 Rembrandt: Study for the "Stalmeesters", c. 1662. The oil painting is in the Rijksmuseum in Amsterdam. 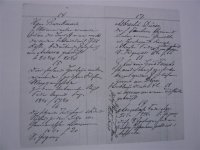 Beckerath endeavored to acquire cornerstones of German draftsmanship for his collection. 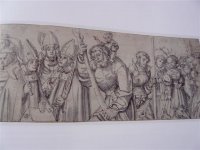 Saints are depicted with attributes, in the center Saint Christopher, model for a painting in the "Royal Collection", today Hampton Court. 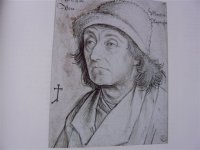 Around 1490/1495, belongs to the earliest silverpoint drawings by Hans Holbein d.Ä..

Seated Woman, around 1715/1716, not a preliminary drawing, but an autonomous work of art 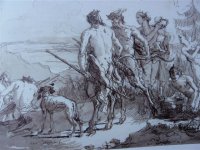 Other areas of collection: small bronzes and works of art from the Italian Renaissance

Bronze triton from the workshop of Severo of Padua, first third of the 16th century. Hybrid being fighting with a snake, inspired by the Laocoon group found in Rome in 1506.

The collector donated the collection of 144 small bronzes to the Berlin Sculpture Gallery in 1902, also in exchange for an annuity. Today there are only more than 20 of them in the Bode Museum.

High relief from the della Robbia workshop. Maria with angels worshiping the Christ Child, around 1500, colored terracotta, in the Krefeld Kaiser-Wilhelm-Museum.

The Madonna and Child by Nanni di Bartolo, a group of figures made of fired clay, also came to Krefeld, acquired by Krefeld in 1901 for 10,000 marks from Adolf von Beckerath's collection. Considered the greatest treasure in the Krefeld collection. Sponsors are being sought for the urgently needed restoration of this group of figures. 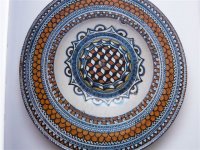 Beckerath's majolica collection became famous, most of which was sold in a special auction by Rudolph Lepke in Berlin in 1913 during the collector's lifetime. Adolf von Beckerath not only collected figuratively painted majolica from the 16th century, he was also one of the first collectors in Germany to collect early majolica. A small part is in the Krefeld Kaiser-Wilhelm-Museum.

Faenza majolica pharmacy jar, 2nd quarter of the 16th century, painted in blue. Acquired in 1916 from the estate auction for 435 marks by the Krefeld Museum Association. 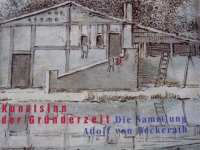 Unfortunately, the Renaissance collection of the Krefeld Museum, the majority of which came from Beckerath's property, is in storage.

In addition to the works of art mentioned, the collection also included Stefano da Verona, Filipo Lippi, Botticelli, Michelangelo, Titian, Dürer, Rubens, van Dyck, Rembrandt and Francois Boucher. Knowledgeable contemporaries such as Friedländer and Bode attested to Adolf von Beckerath's "sense of art and historical understanding". His collection of drawings alone comprised 3,456 works, which he made available to the Kupferstichkabinett in Berlin in exchange for an annuity. After his death, this collection was auctioned off by the Rudolph Lepke auction house in Berlin from May 23 - 26, 1916 for around 2 million gold marks (approximately €16 million at today's value).

Although Adolf von Beckerath spent most of his life in Berlin, he felt close to his hometown of Krefeld and granted special rights to sales from his collections.

Various fortunate circumstances have led to Adolf von Beckerath succeeding in building up a collection that was unique in terms of quality and scope in the German-speaking world and which earned him the reputation of being a pioneer of the legendary generation of collectors.

Also important for Adolf's success as an art collector was his relationship with Wilhelm Bode, which had existed since 1870 and under whose direction the collections of the imperial capital achieved world fame. However, Bode's relationship with the idiosyncratic Beckerath was by no means free of conflicts. Because of his well-founded knowledge, Beckerath was appointed to various expert commissions, and he was also able to do practical work for the museum while traveling, as Bode's travel companion and agent, so to speak. But the correspondence with Bode clearly reveals conflicts between the two difficult and idiosyncratic art lovers (public and private). We know of Wilhelm Bode that he wanted his collectors to be dependent on himself; if they went their own way, quarrels arose.

Bode respected our collector. He considered him "the only one who has any understanding of the scholarly importance of art and of our museum collections".

The high quality standard of the private collections supported by Bode is impressively conveyed in an exhibition catalog from 1898 entitled "Artworks from the Middle Ages and the Renaissance from private collections in Berlin" in the old Academy of Arts. Among other things, a Beckerath cabinet was set up for this purpose. Beckerath's contribution to the exhibition was unsurpassed in all areas (drawings, paintings, sculptures and furniture).

Adolf von Beckerath's treasures were on display in other exhibitions:

1901 in the Berlin art salon 500 drawings of the Netherlands

1902 in the freshly renovated print room in the New Museum on the Museum Island, the meanwhile public collection of all of the collector's drawings

In 1916, after Adolf von Beckerath's death, a selection was presented that paid tribute to the collector prince.

November 30th, 2002 to March 23rd, 2003 the large anniversary exhibition in the Berlin Kupferstichkabinett with the topic "Art sense of the Gründerzeit - the collection Adolf von Beckerath".

Many Berlin collectors of the Gründerzeit were organized collectively. From 1886 in the Kunsthistorische Gesellschaft and from 1894 in the Kaiser Friedrich Museumsverein.

This organized art business has led to the Prussian art collections achieving world fame through good cooperation between collectors and museums, despite initially opposing collection purposes (private and public nature).

What is interesting from a socio-political point of view is that the circle of upper-class collectors, among whom our relative Adolf von Beckerath was one of the most important, must be seen against the background of the change from the decentralized city of Berlin to a modern industrial and commercial metropolis. The cultivated lifestyle and commitment to the museums is an expression of a newly formed upper class in the imperial capital, which replaced the old aristocratic elite in their role in the city's cultural activities. A culture of collectors emerged in which private art ownership went hand in hand with the obligation to publicly engage in donations to museums. The cooperation between collectors, museum directors and art critics is closely related to the cultural reform efforts at the turn of the century. Collecting art was a powerful medium of social integration for the wealthy citizens who sought to assert themselves against the long-established nobility, officers, and civil servants. Art collections offered good opportunities for contact between otherwise separate social groups.

In an obituary about Adolf von Beckerath written in 1916 it can be read that "Beckerath ultimately went about as a kind of wise Goethe among the last generation of collectors. Marveled at with awe because of his almost inexhaustible treasures". We can be proud of our relative, who is still remembered today on the sponsor plaque in the Berlin Picture Gallery.

Text and images from a lecture by Dr. Astrid von Beckerath, born Framheim, Hamburg, held on the occasion of the 10th von Beckerath family day on May 17, 2008 in Krefeld.