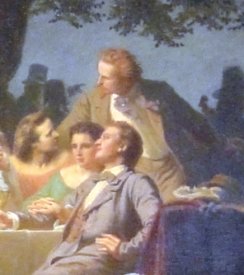 After his study at the Academy of Arts in Dusseldorf under Joseph Kehren, Moritz moved to Munich in 1859. There he worked with Moritz von Schwind for a short time and worked as an independent painter then. The years 1864/65 and 1886/87 he spent in Rome, Italy. He painted preferably dramatic situations of the history of the Middle Ages, so amongst others for example Alarichs burial in the Busento river. Together with Karl Andrea he painted the converted Cathedral of Pécs (Fünfkirchen) in Hungary from 1882 to 1891.