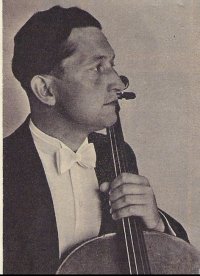 Hermann von Beckerath was busy as a professor for music in Munich and as a solo-cellist among others with the Munich Philharmonic Orchestra. He played at the Richard-Wagner-Festival and organized numerous tours.

He was an interpreter among others of Johann Sebastian Bach and contemporary music. His father was the painter Willy von Beckerath and his brother the organ builder Rudolf von Beckerath.